Ląd, non-destructive tests of paintings by Jerzy Wilhelm Neunhertz in the dome of St. Mary’s and St. Nicholas’ Church

This year has seen another season of conservation works performed on the mural paintings in St. Mary's and St. Nicholas' Church in Ląd, Greater Poland. The murals are a creation of the outstanding fresco painter Jerzy Wilhelm Neunhertz (1733).They represent the Triumph of God's Wisdom in the Church (Domus Sapientiae).

Their conservation was begun in 2012 by the late prof. Ewa Roznerska-Świerczewska. Today, her work is being continued according to the conservation program and concepts she developed. 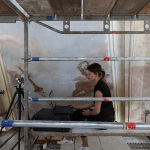 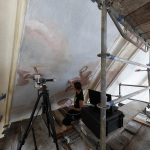 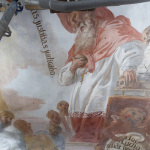 Restauro was asked to conduct conservation tests in the project, including examination of the execution method of the paintings. Preliminary tests were conducted by means of a non-destructive, handheld XRF analyzer.