The winners of the Interior of the Year competition

The winners of the Interior of the Year competition, organized by the Ulica Piotrkowska Foundation under the auspices of Mayor of Łódź, Łódź Voivod and Łódź Voivodship Marshal, have been announced.

„The Jury appreciated the importance of the performed conservation works, which restored a faithfully reconstructed historical building to Łódź, confirming the prominence of its material heritage dating to the period of the city’s most intensive development” 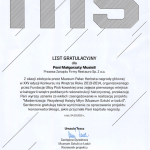